Who has a job for life these days? That fondly-remembered (probably mythical) era when you’d start work in the factory at 17 – the same place your father worked, and his father before him – safe in the knowledge that you’d be clocking on until you were 65 and it was time to retire and give your days over to your racing pigeons or the rhubarb in your allotment… Those days have now gone. Nobody can really expect to stay in a job for very long. But at the same time, the ‘default retirement age’ as it is known, which had been set at 65 for decades, has been phased out, and UK workers are under pressure to work for longer.

They’re all getting a bit more like the humble actor. We theatricals must be more familiar than most with this sort of work landscape. Let’s face it, much of the time in our profession, as soon as we get a job we’re preparing for it to be over, eyes always on the horizon. Along with a flexible attitude to work comes a very loose approach to retirement. If you stay the course and battle through those difficult early years, chances are you’re in it for the long haul. Most of us are not waiting for the day we can throw in the towel – it’s far more likely that we are travelling hopefully, always waiting for the Big One and fully expecting to keep going until we finally peg out live on stage. Tommy Cooper, Sid James, Eric Morecambe; the profession is full of romanticised tales of seasoned pros breathing their last in front of a paying audience.

But as we know, the profession itself often has other ideas. Despite our ageing population, the acting world doesn’t seem all that interested in old people. In an industry that is passionately infatuated with Youth, is there a place for an actor over 50, 60 or 70?

I spoke recently to directors Sam Walters and Auriol Smith, who founded the Orange Tree Theatre in Richmond, and ran it for 43 years. Sam retired as Artistic Director of the theatre in 2014, and although both he and Auriol are still active in the profession, he was sounding rather ground down. ‘My desire to be involved in the theatre at all has diminished enormously recently,’ he said. Describing himself as ‘considerably less enthusiastic’ about the profession, he decried the theatre world’s obsession with youth: ’The New is concerned with the Young. And the tendency is always to denigrate the past.’

Auriol Smith has always acted as well as directing, and says she is ‘just as enthusiastic, but more cynical about the way theatre is heading.’ The contribution Auriol and Sam have made to the profession over the past four decades can’t really be overstated, and yet they clearly feel side-lined.

There is much talk these days of the ‘Third Age’, which is defined as the period of ‘active retirement’, post middle-age. I imagine most actors in their late 60s and 70s would take issue with the suggestion that they are in any sort of retirement at all, rather that they are trying to engage with work in the same way as ever – we all know the stories of John Gielgud changing agents at 96 in his determination to keep working. But if the work isn’t there, how can actors stay engaged?

A number of recently-established companies are trying to grapple with this issue. The Visible Theatre Ensemble, under artistic directors Sonja Linden and Sue Lefton, is one such endeavour. Their intention is to create ‘exciting contemporary theatre that both represents and transcends issues of older age. Our vision is a future where the contribution of older actors is honoured by British theatre.’

Visible recently worked with playwright Sonja Linden and a cast of older actors to devise their very successful production, ‘Who Do We Think We Are?’, which was presented at Southwark Playhouse in 2014, and they are currently running a season of workshops under the heading ‘Gravitas’, for professional actors over the age of 60, led by seasoned practitioners such as Mike Alfreds and Max Stafford-Clark.

Visible contend that ‘there is a lot of negativity about being older in our society, and this is heightened for actors, continuously in the public gaze. What is missing is the recognition of what is their most powerful resource – life experience.’ 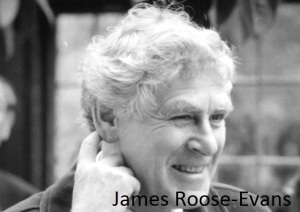 Another company set up specifically to create work for older actors is Frontier Theatre Productions, led by veteran director James Roose-Evans. James’s extraordinary career spans 60 years; among many other achievements, he was founder of Hampstead Theatre, and adapted and directed the original production of ‘84 Charing Cross Road’ in the West End and on Broadway.

James told me that, while running a workshop in London with actors over 70, he’d had been struck by how open to exploration they were. ‘This set me thinking about what a huge bank of talented actors in their sixties upwards we have in this country, which is largely untapped.’

James’s experience led to the establishment of Frontier with director Jake Murray, who was Associate Artistic Director at Manchester Royal Exchange from 2001 to 2007. ‘The Third Age is as rich and profound as any other phase in our lives,’ says Jake. ‘In the past, old age was seen as a great achievement, a time of wisdom and new insights. Now we have drawn a veil over it. As a consequence a vast amount of people have been made invisible. We must give them a voice.’ 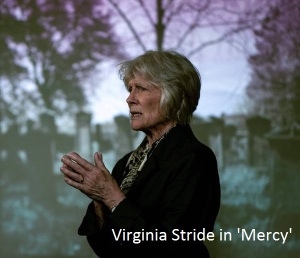 James and Jake hope to achieve this both by reviving plays, but also finding new writing. Their latest production is ‘Mercy’ by Clare Whitehead, part of the So And So Arts Club’s EverHopefull Repertory season. ‘Since Frontier was launched, we have been getting scripts from New Zealand, Australia, America, Canada, as well as from the UK,’ says James. ‘Clearly we have touched a nerve.’

James is also keen to involve younger actors in Frontier’s work, to give them the chance to learn alongside older actors. ‘Clearly older actors, if they have talent, have a greater experience of the craft of acting, which they can impart to younger actors.’

There are plenty of young actors out there, of course, but one of the industry’s main preoccupations has always been the need to attract young audiences. This in turn has fed a negative attitude towards older theatre-goers – the cliché of the ‘blue-rinse brigade’. During their time at the Orange Tree, Sam Walters and Auriol Smith built up a fiercely loyal – and very theatre-literate – audience. ‘Theatre-going is a habit,’ Ariol points out. Sam agrees: ‘It is something they have known and grown up with. For the older members of the Orange Tree audience, their theatre-going was an important and meaningful part of their lives. That is why I always reacted strongly to any disparagement of them.’

I asked James Roose-Evans if he thought theatre was generally more appealing to older audiences. ‘I don’t agree with this. When I directed Christopher Fry‘s ‘Venus Observed’ at Chichester, Patrick Garland included it in the season but not expecting it to do well at the box office. The production was sold out, and what amazed Patrick and myself was how many young people responded, discovering Fry for the first time‘.
Jake Murray believes it is a complex issue. ‘It’s partly generational, as theatre was part of the older generation’s landscape, educational standards were higher back in the day and theatre didn’t have to compete with Netflix, Playstation, Facebook, etc. But there is still a strong, dedicated young theatre-going audience out there who are excited by what they see on the stage.’ 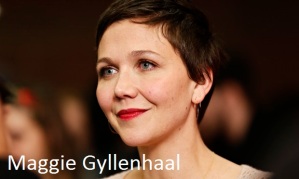 Discrimination against older performers is also being raised more and more – actress Maggie Gyllenhall recently spoke out against ageism in Hollywood, and revealed she had been told she was too old to play the love interest of a 55-year old male actor. She is 37. It is certainly still true that women have a far tougher time of it as they get older. As James Roose-Evans observes, ‘After sixty, women tend to become invisible.’ His work with Frontier hopes to improve this state of things by producing new work specifically designed for older actresses. ‘One example which, to the best of my knowledge, has never been tested in the theatre,’ says James, ‘is the rich relationship between grandmothers and granddaughters who are in their late teens, early twenties.’

For his part, Jake Murray is optimistic. ‘There are more writers writing great parts for older women,’ he says, ‘and not just female writers, but men too. I tell writers to write for women, especially older ones, as there will always be more talented women in the profession than men.’

In cinema, as Murray points out, the ‘grey pound’ is being served targeted more than ever:
‘There is an increasing presence for big movies that deal with the older experience. The ‘Marigold Hotel’ films are a case in point, and movies like ‘Quartet’ and ‘Amour’. I think when people love a screen actor they enjoy seeing them still doing it in their old age, especially if they can be playful with their image.’

Television, most of all, seems willing to embrace its older audience. Shows like ‘Last Tango in Halifax’ and even ‘Game Of Thrones’ clearly recognise the value of casting older actors –performers like Diana Rigg and Julian Glover bring decades of experience, but also carry with them the weight of earlier roles.

The entertainment industry deals in dreams, ideals and fantasy, which often means avoiding the harsher realities of life. But we have an ageing population – a community which can’t be ignored and which has an abundance of life experience, time to consume entertainment and in many cases, more money than the young. And perhaps the tide is turning after all. Companies like Visible and Frontier are showing that the older actor still has an important place in the theatre, and one of the hottest tickets in recent years has been Theatre Royal Bath and Tricycle Theatre’s production ‘The Father’, starring Kenneth Cranham, which explores the devastating effects of dementia on an 80-year old man – although, there is a danger that the theatre treats older characters only in terms of declining faculties: as James Roose-Evans warns, ‘It is not all about Alzheimer’s.’

It’s time we embrace fully just how important stories about older people can be to our culture – and this means we need to support older storytellers, both actors and writers. Theatre should be a window onto the whole of life, not just the first part.

Frontier Theatre’s production of Clare Whitehead’s ‘Mercy’, directed by Jake Murray, is part of the EverHopeFull repertory season and runs from September 1st to the 26th at 6 Frederick’s Place, London EC2R 8AB. Tickets are priced at £10.

2 thoughts on “Close Encounters with the Third Age”