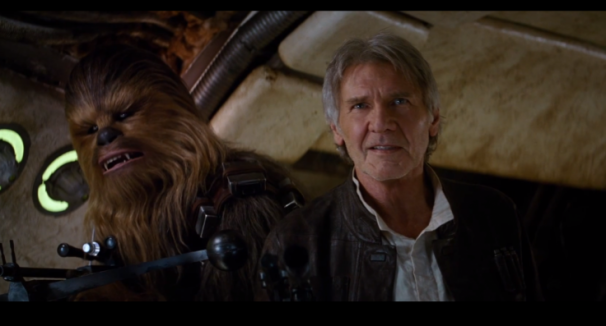 Those three simple words will have sent a seismic frisson through most film fans of a certain age. I have to admit to feeling a thrill of emotion when I watched the new trailer for ‘Star Wars: The Force Awakens’ and saw Harrison Ford’s grizzled visage alongside his Wookie sidekick once more. But quite apart from a Seventies’ child’s nostalgia rush, ‘Star Wars’ has another significance for me: I remember coming home after seeing the first film, setting out my chairs in an X-Wing fighter configuration, and playing at being Luke Skywalker. But the important part, at least as far as my future self was concerned, was that I didn’t want to be a pilot for the Rebellion, I wanted to be in ‘Star Wars’. Along with Dr Who (Tom Baker, of course) and James Bond (Roger, naturally), George Lucas’s epic started the ball rolling on my fascination with acting.

Over the following years, like most thespians in waiting, I spent many a happy hour wielding cardboard light sabres and plastic Walther PPKs, hanging off helicopters (or climbing the banisters) and ignoring imaginary cameras everywhere. I even very nearly severely damaged myself leaping down the stairs, trying to recreate that moment in the ‘Starsky and Hutch’ titles where David Soul jumps off a wall onto the roof of his Gran Torino. In other words, I put in years of training. Slowly (and nervously), I started to take my ambition further, and began acting outside the safety of my house – school plays, amateur productions, drama at University, all the way to three years at LAMDA. It’s rather astonishing to think of it now, but I actually made the jump from day-dreaming boy to an actual, professional actor.

I can’t remember the exact moment when I first described myself as an actor; funny really, as it should have been a major milestone, considering all those years of yearning. But I have a feeling there might have been a certain tentativeness to it. Calling yourself a ‘drama student’ is pretty safe and unequivocal – pay the fees and don’t get kicked out, and no one can challenge you. But when you first call yourself an actor, you are opening yourself up to investigation. You are inviting judgement – and more to the point, you need to have concrete proof, which is where it starts getting complicated, because there are some times when it can seem harder to describe yourself as an actor than others. It’s almost as though there is a sliding scale of legitimacy:

This can lead to some uncomfortable encounters – at a first-night party, in a taxi, at family events – depending on where you are on the scale at the time. It can be reminiscent of that lovely old Peter Cook joke:

In truth, it’s not so much how others see us, but how we see ourselves. All those old jokes and clichés about the ‘resting’ actor can bite deep – after all, ‘to act’ must be the most active verb there is. Can there be such a thing as an inactive actor? 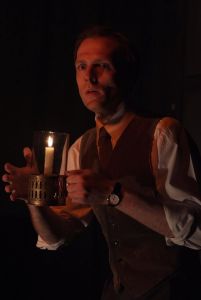 I remember when I was appearing in ‘The Woman In Black’ – 10 months of wonderful, stimulating work. In my final week I was invited to talk to a kids’ drama workshop. The chap who was running the session said, ‘You can hear how Chris’s voice is really resonant and well-exercised because he’s been working so long’. I felt thoroughly legitimate – a proper actor, with plenty of evidence to back it up – after all, my actual face was on the poster. A week later I was unemployed, sitting at home, and someone else’s picture was plastered outside the theatre. Was I still an actor?

But of course I was. Being an actor is about more than your last job, or your next one – it is an identity, even a philosophy. It is a brave choice to devote your life to a job where the work itself is its own reward, especially when there is so much propaganda telling us that we can only validate our existence through the accumulation of money and material goods.

Anyway, I think there comes a point of no return, when you realise that you are so far down the path, it’s too late to turn back. So it is important to brazen it out, and call ourselves actors, even if the closest we’ve come to a job in six months is a couple of castings and a voice class. The title of actor is hard-won prize and we should cherish it.

6 thoughts on “When is an actor not an actor?”